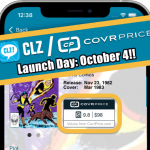 CLZ Alwin, with a summary of CLZ’s busiest month ever, Oct 2022!
The month started with the CLZ team going to Paris to celebrate our 22nd anniversary. Then when back in Amsterdam, instantly rolling into our biggest launch ever: the integration of comic values from CovrPrice into our comic apps and software.
And then finally, dealing with all the questions about it, fixing some issues (pun intended) and releasing the first improvements based on your suggestions!

But I am happy to report that the launch was a huge success, with thousands of users signing up for CovrPrice and linking their CP and CLZ accounts! Users love seeing the values for their comics and getting an idea of the total value of their collection.

We will of course keep improving the CovrPrice features, but we can now finally free up part of the team for other, non-comic projects. We’ve got some cool stuff coming up!

The CLZ team in Paris, check out the pics!

The Collectorz.com company was founded in 2000. But in 2020, we were not able to celebrate our 20th anniversary because of the virus.
However, early October we finally did, even though it was our 22nd anniversary by now 🙂 The full CLZ team went to Paris for 3 days of sightseeing, eating, drinking and lots of laughing!

Check out the pictures here! 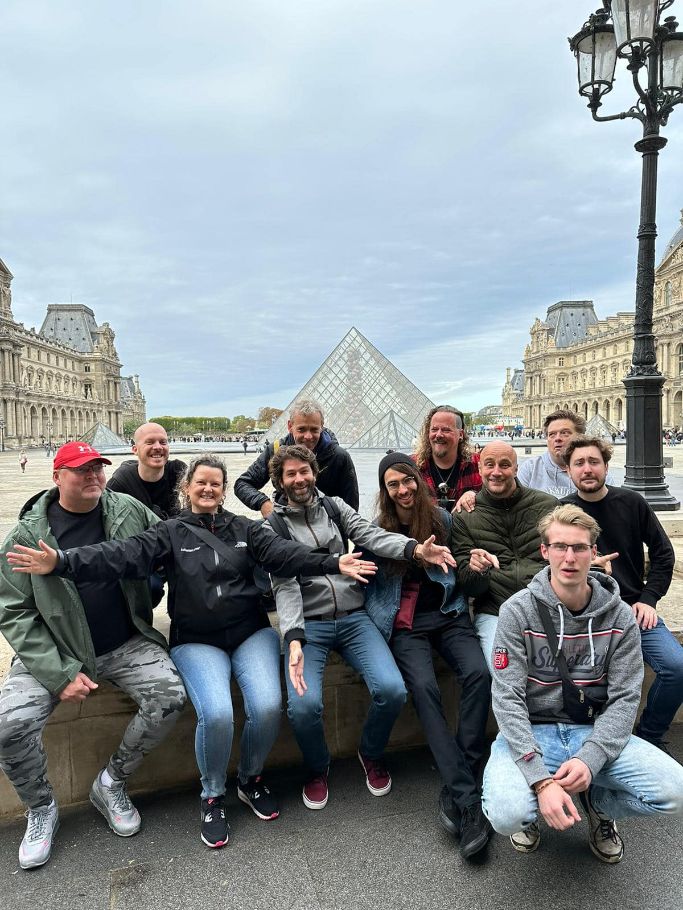 Now live: Get comic values from CovrPrice in your CLZ app or software

Today, it’s been 4 weeks since the BIGGEST launch in CLZ history, the integration of comic values from CovrPrice, straight into your trusted CLZ app or software!

This feature helps you to find out what your comic collection is worth, by automatically assigning fair market values to the comics in your existing collection and the comics you add in the future. 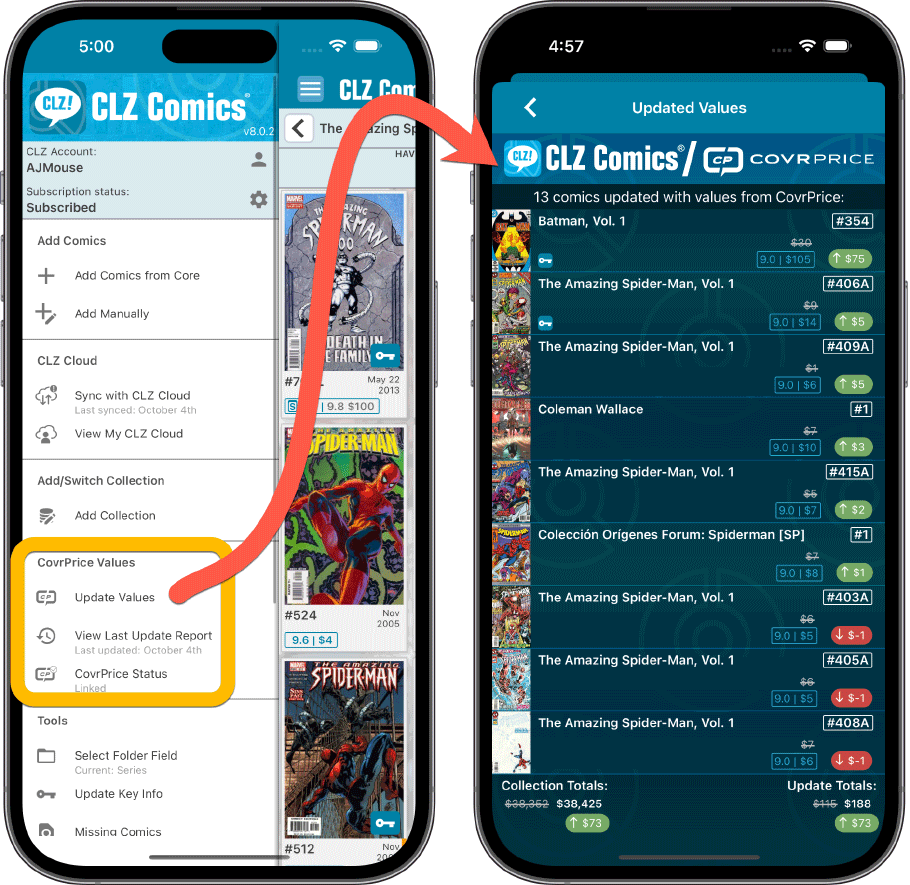 By now, all the kinks have been worked out and the integration has been tweaked and tuned to perfection! Everything is running smoothly now. If you haven’t done so yet, this is the perfect time to join the fun by signing up for CovrPrice:

To get access to the comic values from CovrPrice, you will need a subscription to the CovrPrice “UNLIMITED” plan (US $6.95 per month or US $60 per year).

Now, to finally get the actual CovrPrice values into your app, for your entire collection, use Update Values from the menu!
TIP: CovrPrice is providing fresh values continuously, so to keep your values up-to-date, regularly run Update Values again, e.g. daily or weekly. Each time you do, you will get a nice report of which values have changed and by how much!

Two improvements for the CovrPrice integration

Based on your feedback and questions, we have made 2 big improvements to the CovrPrice integration already, that is, to the way values are displayed in your app:

When a My Value is filled in, this is made clearer using a “person” icon next to the value. Also, on the comic details page it will now show the CovrPrice value box anyway, so that can easily compare the two (My Value and CP Value) without having to open the Edit screen. 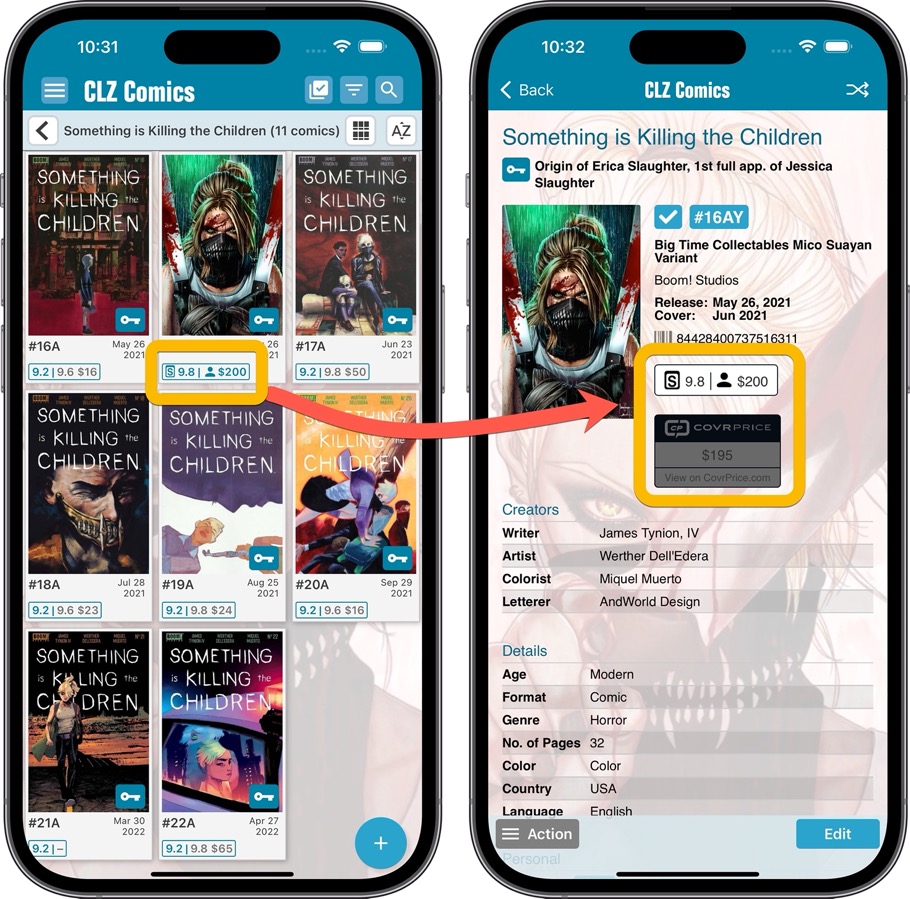 On the comic details page, when a comic is linked to CovrPrice, it now ALWAYS includes the CovrPrice box and “View on CovrPrice” link, even when there is NO CovrPrice value. This will help you to investigate WHY there is no value. 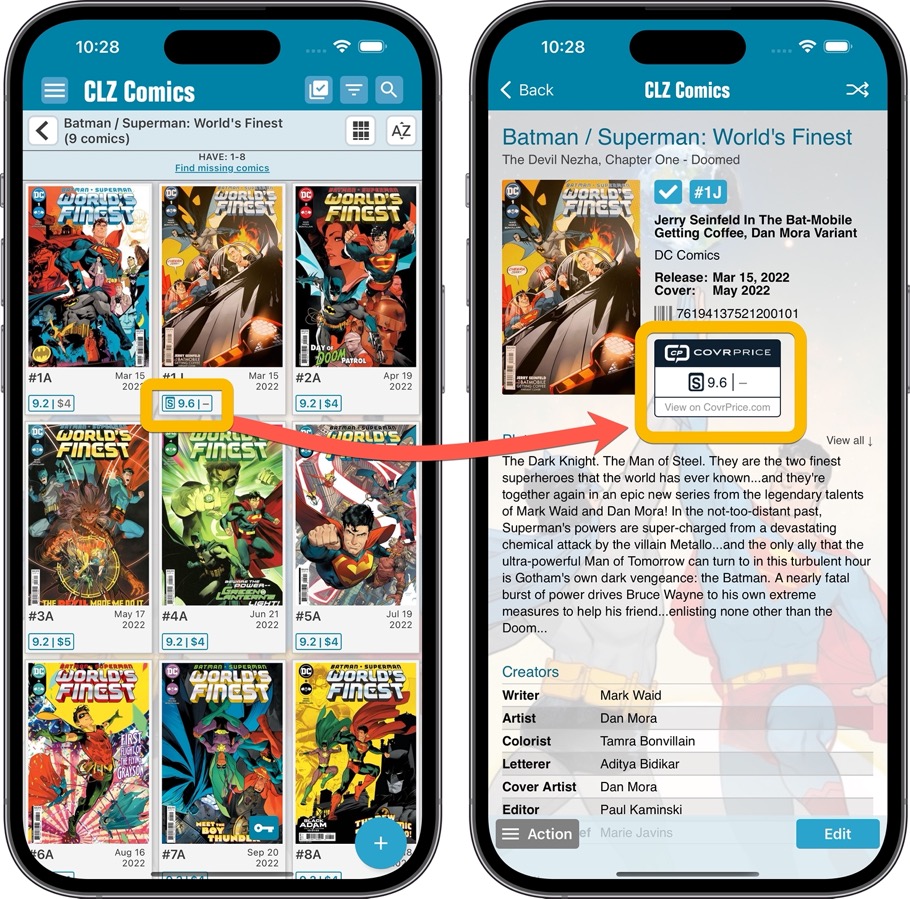 After the release of the iPhone 14, many owners of the iPhone 14 Pro edition contacted us that the barcode scanning in the CLZ app did not work anymore. Searching the internet, we found that may developers of scanning apps were facing the same problem 🙁

It took us a while to find the cause and implement a solution, but last week we were able to release 5 updates for all 5 CLZ apps for iOS. The new update uses the macro lens of the iPhone 14 Pro (and 13 Pro!) for scanning, which not only solves the problem but results in the app scanning better than ever before!

TIP for iPhone 13 Pro and 14 Pro users: you need to keep your phone quite a bit closer to the barcode now!

Now that we can finally free up part of the team for non-comic projects, our 2 mobile developers Pim and Bernard have teamed up with web-developer Stijn to create a new CLZ app from scratch!

They are working on a new app called “CLZ Scanner”, which will replace CLZ Barry. It will become a better and easier-to-use app for scanning barcodes into your Connect web-based software and Collector desktop software. No Barry ID needed, it will connect using your existing CLZ account.