Previously, the movie list only showed the logo of the first Format, but now it shows all Formats that you selected for the movie, e.g. 4K UDH and Blu-ray. 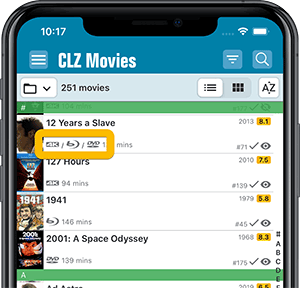 For Cast and Crew 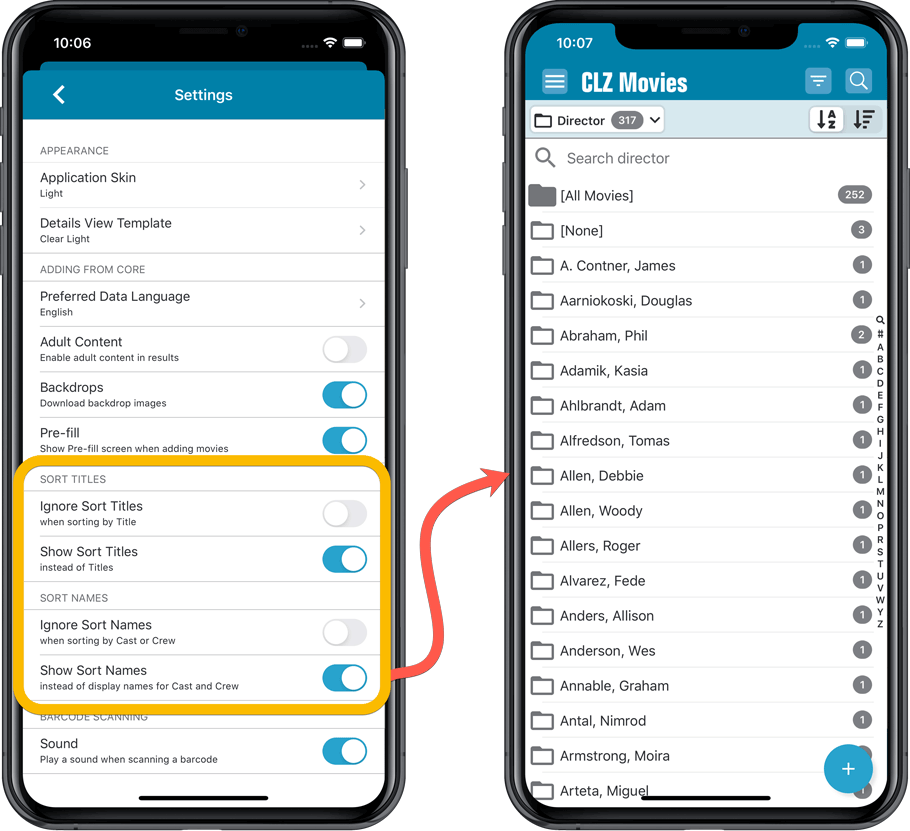 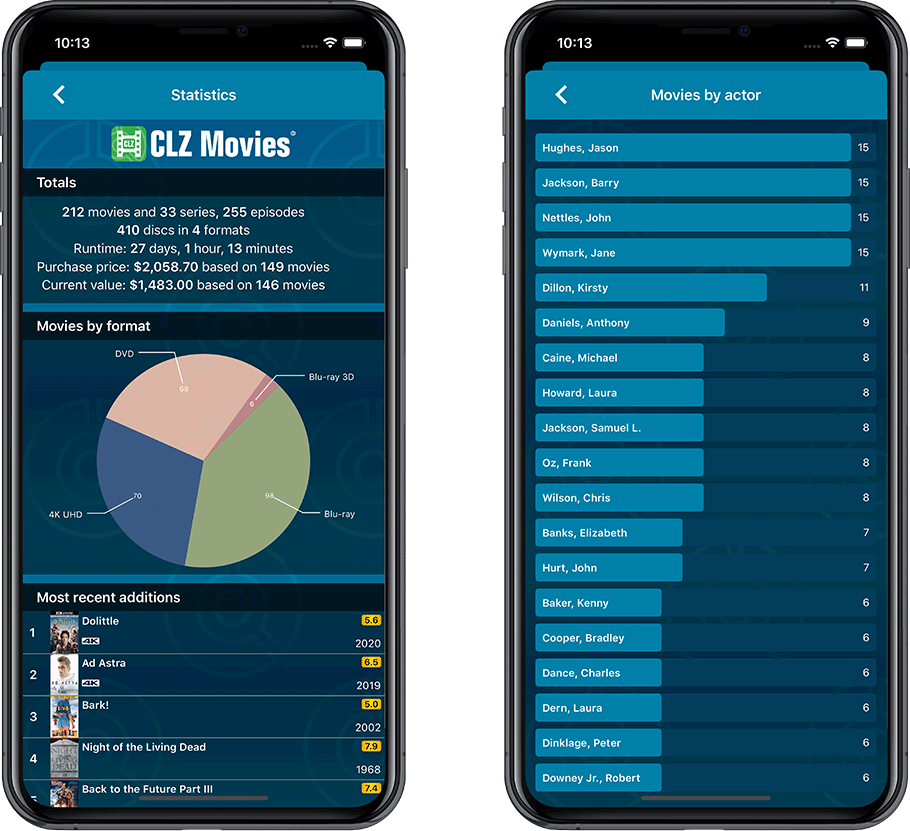 A small update for your CLZ Music app today: When adding albums by Artist/Title, you can now filter the search results to only show a specific format.

After searching for artist/title, tap the new “All Formats” button at the top right and switch it to “Vinyl” to see vinyl results only, or set to “CD” to list CDs only. 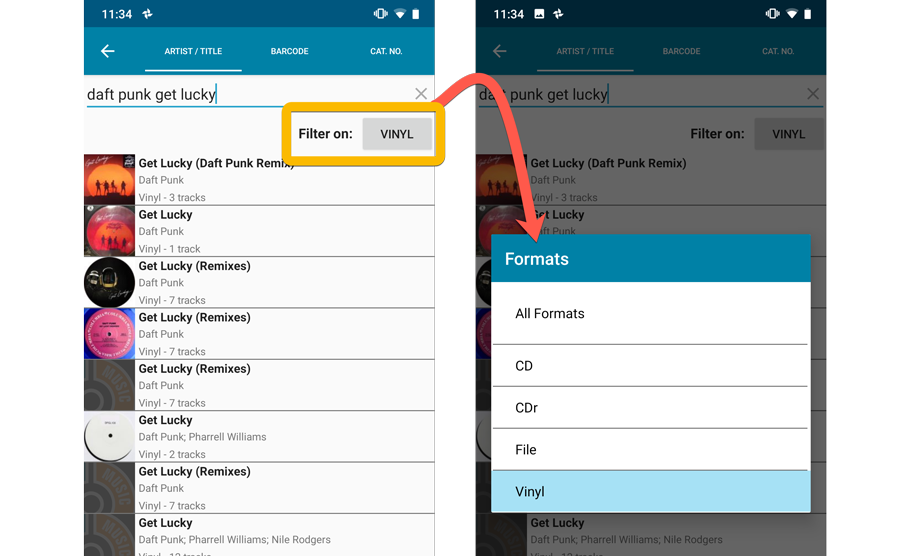 If you are always adding your albums by Artist and Title, you will certainly enjoy today’s little tweak to the Add Albums screen. A new All / CD / Vinyl selector lets filter the artist/title results by Format.

All Nirvana / Nevermind results on CD: 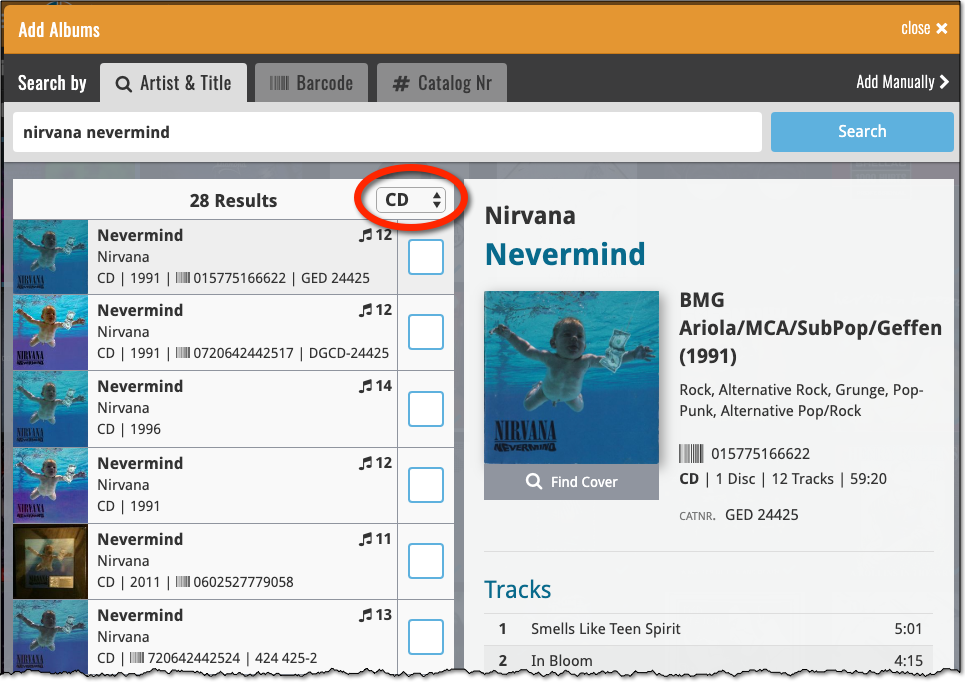 All Nirvana / Nevermind results on Vinyl: 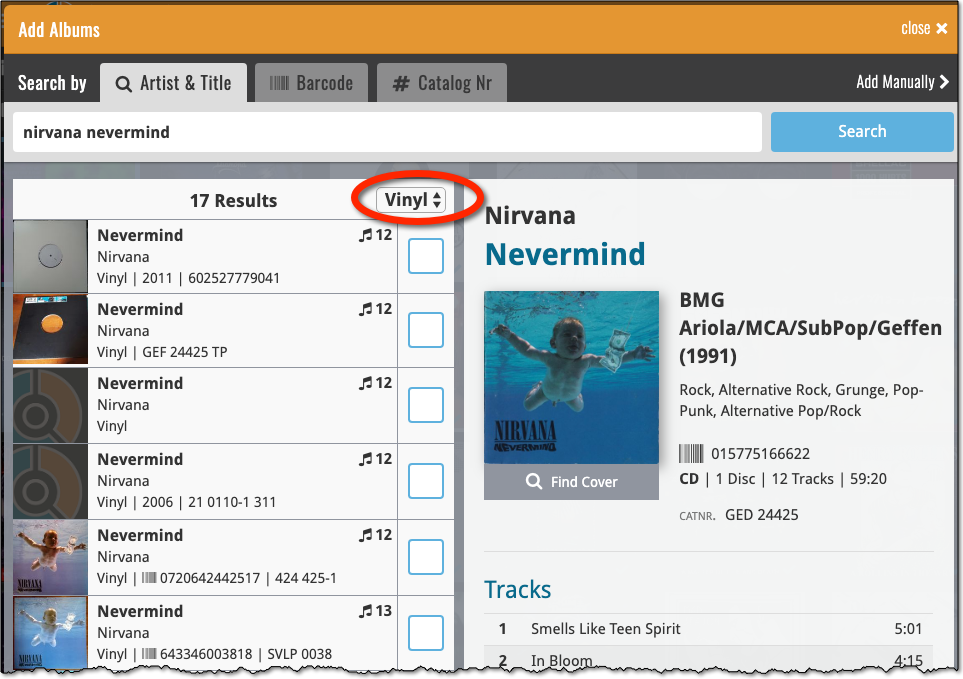 With digital movie formats becoming more popular, we have decided to add the most popular ones to the “format picker” drop down in the Add Movies screen, all with nice new icons, separated in “Physical” and “Digital” sections. 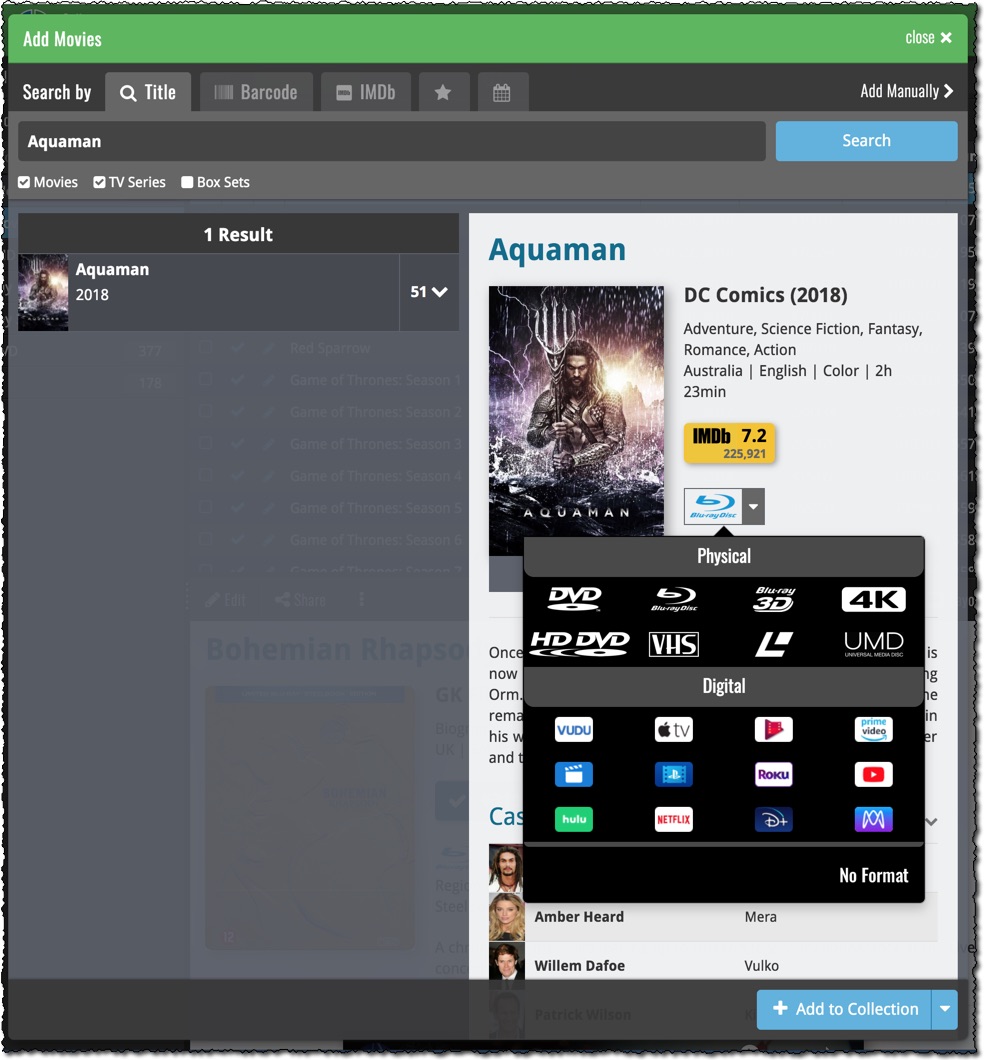 Depending on how much of an IMDb junkie you are, today’s update for Movie Connect could be considered quite a big deal 🙂

As you probably know, we have signed a more comprehensive (and also much more expensive) content licensing agreement with IMDb, which gives us access to more and fresher IMDb data.

Today we’ve released the first new additions for Movie Connect made possible by this new agreement!

This field indicates the number of votes on which the IMDb Rating is based. It is a good indication of 1. how popular the movie is and 2. how trustworthy the rating is. 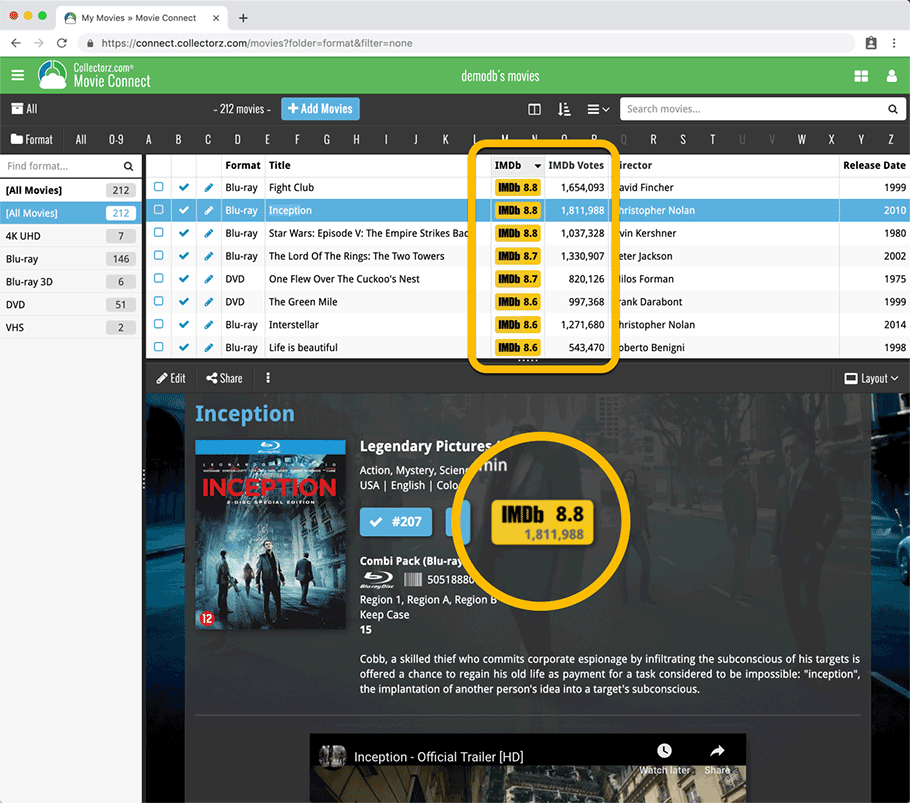 New: IMDb Ratings and Votes are automatically refreshed every day!

The new IMDb content license gives us daily updates of the IMDb Ratings and Votes. This means that every day you automatically get the latest IMDb Rating and Votes data for all your movie entries.

Because the IMDb Rating and Votes now automatically update every day, we’ve removed them from the Cloud and Edit Movie screens as there’s no need to edit them anymore. If you have a movie that you can’t find with the Add Movies from Core screen, you can always report it as missing and we’ll add it for you.

To conform with the more commonly used naming, we have renamed two formats:

Also, the 4K UHD format now has a new icon!

With digital movie formats becoming more popular, we have decided to add the most popular ones as default choices in the Format list, all with nice new list icons and logos for the details panel.

The new format choices have now also been added to the Format picker in the Add Movies from Core screen. Just click the blue Format button and pick from the format choices, nicely separated in “Physical” and “Digital” sections: 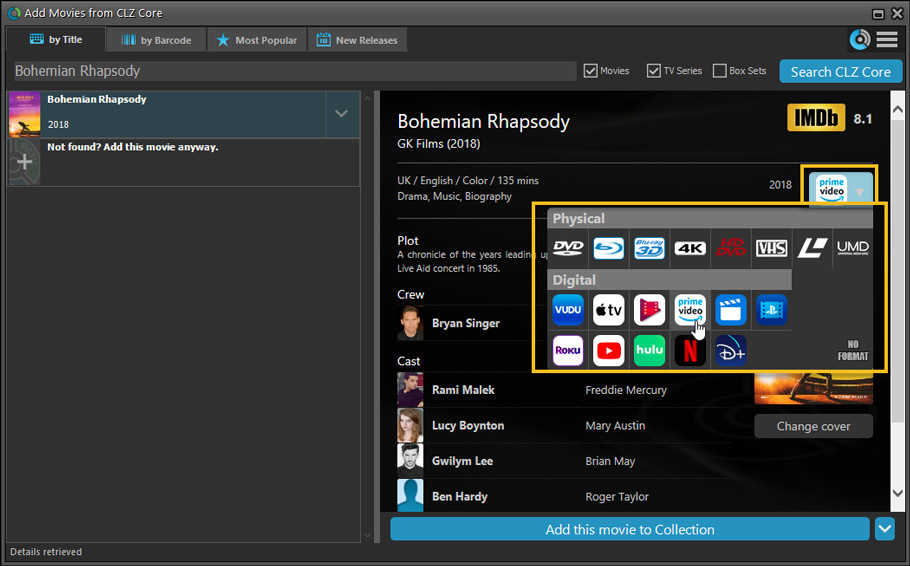 To conform with the more commonly used naming, we have renamed two formats:

Also, the 4K UHD format now has a new icon!

More tweaks to the Add button in Add Movies from Core

We already worked on this area in the previous update, but we were still not completely satisfied. So more tweaks to the Add button in the Add Movies from Core screen today:

A few weeks ago, we introduced the ability to assign multiple formats to a movie, for example, Blu-ray AND DVD. However, the user interface for doing so was a bit clunky (and annoying, to be honest).

So fixed that. Here’s our new super-fast UI, just check checkboxes to select the formats: This week, we updated both our CLZ Cloud storage for movies and the Movie Connect software with 6 extra data fields, multi-format support, plus the ability to track your “Seen It” status per episodes (for TV Series).