Yes, it really is going to happen: Adding, editing and barcode scanning functionality in the CLZ mobile apps.

Pim, our mobile app developer, is currently implementing these features for the CLZ Comics HD app for iPad.
(of course these capabilities will also be released for the other apps, and also for iPhone and for Android).

And today, we’re able to show you the first screen shots:

For the Add Automatically screen, we have decided on a “sliding panel” interface, similar to the Twitter app for iPad. Here’s a screen shot of the screen for CLZ Comics HD. 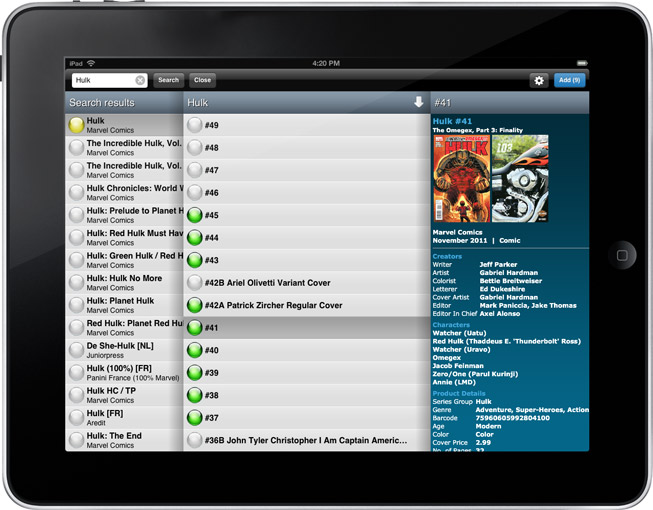 The first panel is showing the results of a Series title search, the second showing the issues of the selected series, and the third level showing the preview of the selected issue. A sliding panels screen like this works great in both portrait and landscape mode and can be easily ported to work on the smaller screen of an iPhone.

Here’s the Edit screen we have created for CLZ Comics on iPad. It lets you edit the main comic details, plus the personal fields like Collection Status (In Collection vs Wish List), Rating and Notes.

This screen too has been designed to work well in both horizontal and vertical mode. 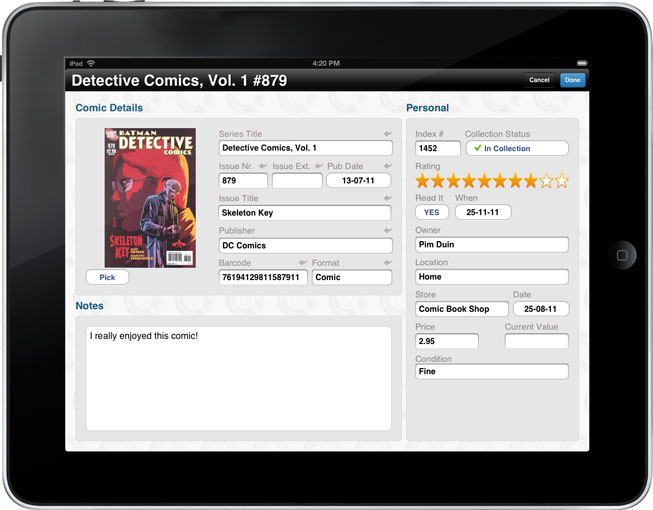 Adding entries to your mobile app by scanning or typing barcodes

Finally, we are also going to bring the ability to add items to your mobile database by scanning barcodes. Pim has already programmed a scan screen similar to CLZ Barry. Just point your iPad camera at a barcode to have it appear in the queue, then search and add them all in batch: 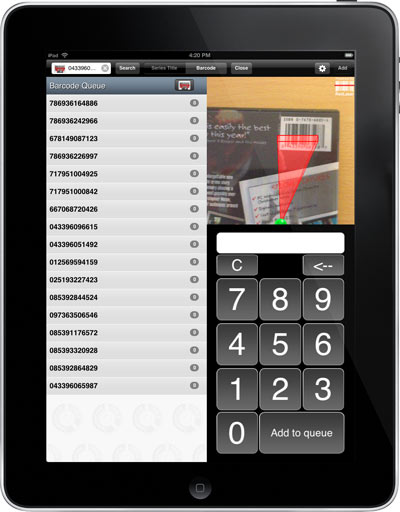 BTW: the barcode scanning feature may not be released for the CLZ Comics HD app for iPad, because our experience with CLZ Barry has taught us that the iPad camera is really too low quality to scan the 15-digit comic barcodes. Hopefully, the iPad 3 will fix this.
Barcode scanning on iPad works fine for DVDs, Blu-Ray Discs, books, CDs and games though and on iPhone 3GS, iPhone 4 and Android there are no problems at all.

So… when will these new apps be released?
That’s a tough question. Because the most complex part of all this still needs to be built: the two-way syncing features between the mobile apps and the desktop apps.
After all, what’s the use of being able to add and edit on the mobile app, if you can’t sync those changes back to the desktop software on your PC or Mac?

We have already decided on a technical solution for this (which was a tough nut to crack, I can tell you). So while our QA team is testing the Add and Edit screens, Pim has started on the programming of this data synchronization tool. It’s hard to predict how long this will take, but I hope to release the first add/edit/scan-enabled app (which will be CLZ Comics) in March.

What’s this going to cost me?
These app updates will be free. If you already own the mobile app (for either iPhone, iPad or Android) you will be able to update to the upcoming add/edit/scan enabled version free of charge.

How will the 2-way syncing work exactly?
Sorry, I can’t disclose our technical solution for 2-way syncing yet. More news about that soon.

Once the CLZ mobile app has scanning abilities, will I still need CLZ Barry?
CLZ Barry is something completely different. CLZ Barry is a barcode scanner app that lets you scan barcodes with your mobile phone and send them to the Add Automatically screen of your *desktop* software. Basically it turns your phone into a barcode scanner, for use in combination with the PC or Mac edition.

The scanning features of the upcoming mobile apps will let you scan and add items directly to the *mobile* software. This feature will be great for adding items while *away* from your desktop computer and then syncing them to your desktop later (when back home).
And of course, the new “add by scanning” screen will be the only way to add items for users who don’t even own the desktop software and are going to use the CLZ mobile apps as “stand-alone” cataloging tools.

In short: if you’re at your desktop computer, then CLZ Barry in combination with your trusted Add Automatically screen will always be the easiest and fastest way to add items to your database.