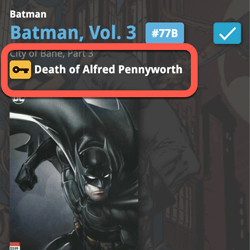 A huge 7.0 update for your CLZ Comics apps is now available, with one big new feature (key comic info!), many new fields and several improvements to existing features. All in one go and all based on your feedback!

IMPORTANT: For this v7 update, we have changed the database format (because of the new fields), so the first time you start version 7, the app will have to migrate your database to the new format. Depending on the speed of your device and the size of your database, this may take anywhere between 15 seconds and several minutes.

When adding new key comics from Core, it will now automatically fill in your “Key Comic” and “Key Reason” fields.
For your existing collection, use Update from Core to get the key info. Here’s how:

IMPORTANT: Getting key comic information from Core is a new premium online service that requires an active subscription. This feature will not work if you are using the app in “grandfathered” status.

Currently, our Core has key information for just over 17 thousand comics. We are still working on the data though and we expect to have around 20 thousand key comics listed soon.
Don’t worry, we won’t go the “speculation route” (like a well known other comic app). We will try to stick to key comics that are “reasonably important to most collectors”. I know keys are subjective, but remember that the main feature here is that Core now delivers the nice little key reason facts about your comics.
If a particular “fact” is not important enough for you to call a particular comics a “Key Comic”, then just uncheck the Key Comic toggle. The key icon will disappear and the nice factual info will still be displayed. If you want that info to disappear too, just clear the Key Reason field. *You* are in control here 🙂 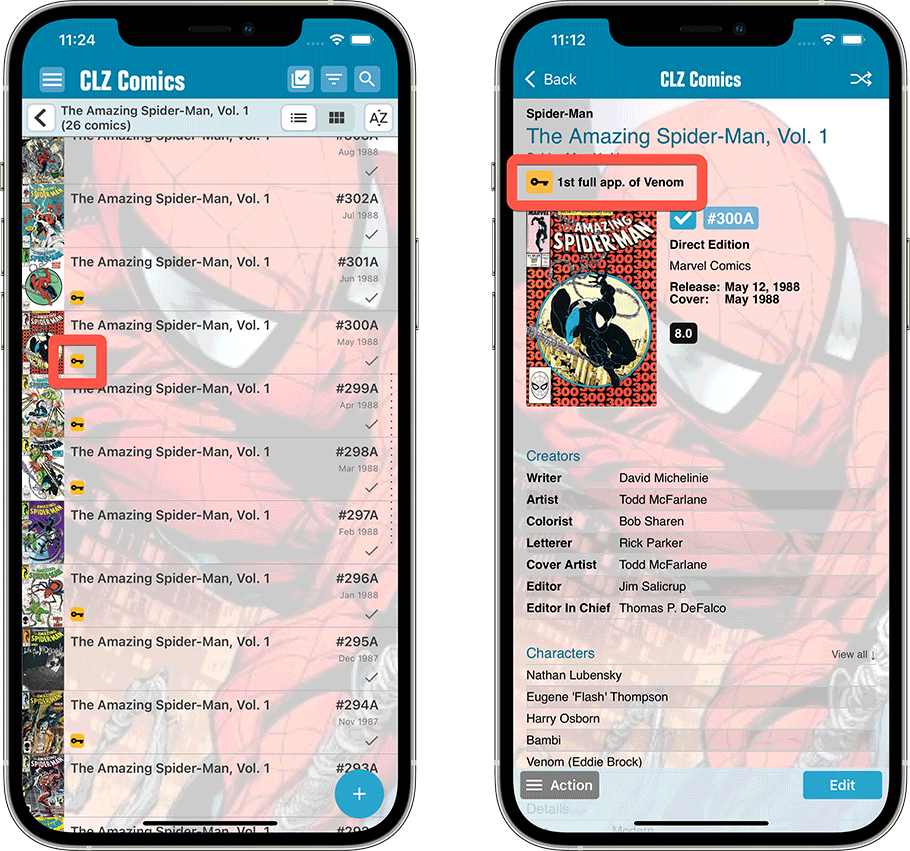 Many users use the app to not only keep track of your current collection and their wish list, but also to keep a list of the comics they sold. Based on their requests, we added the following: 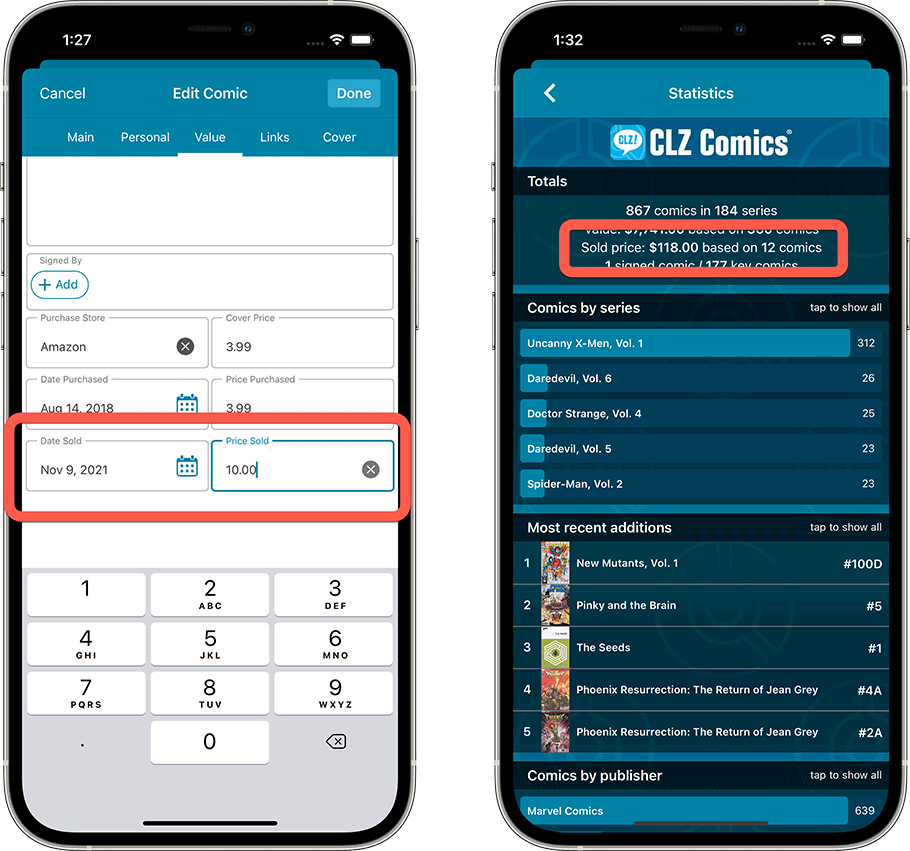 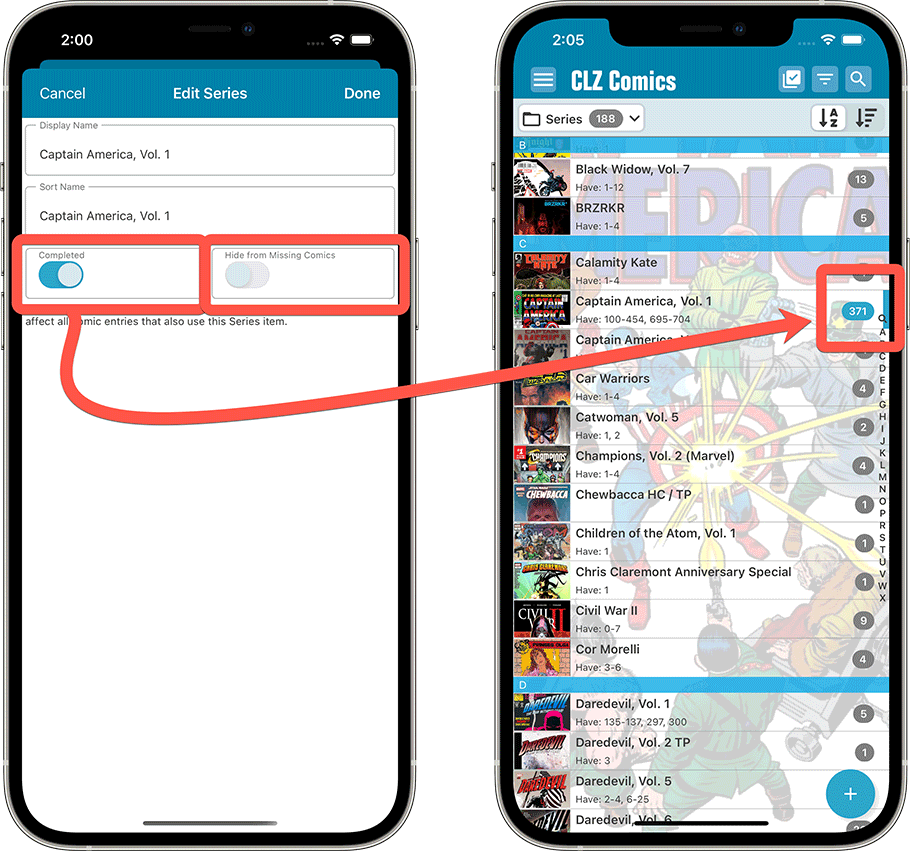 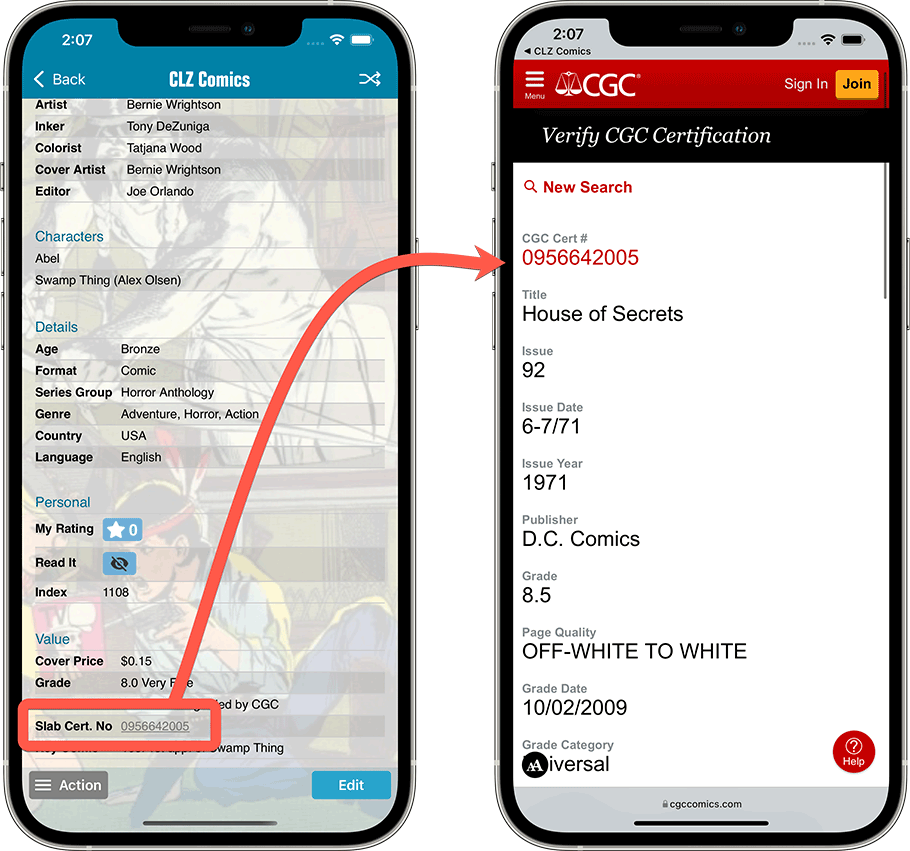 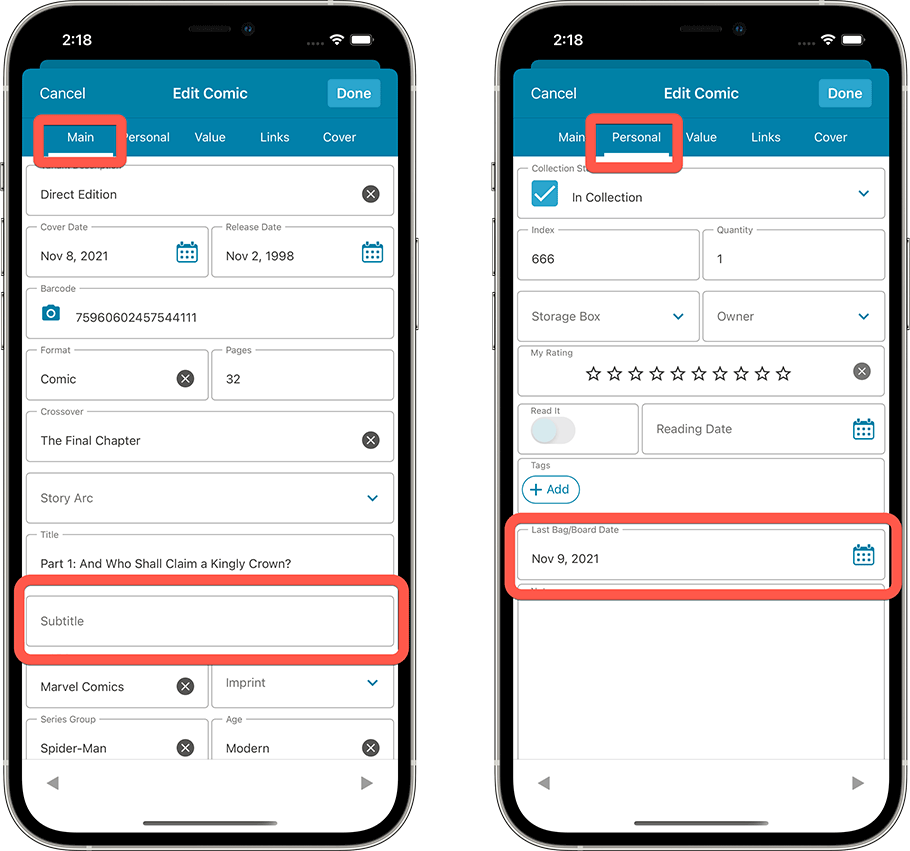 We updated the entries in the list view, to include more data that is essential for collectors:

So list entries now include a clear colored band on the right, indicating the Collection Status, a Slab icon for slabbed copies and a “Qty: ” indicator (when not “1”).
Also, a new Key Icon is now included for Key issues. 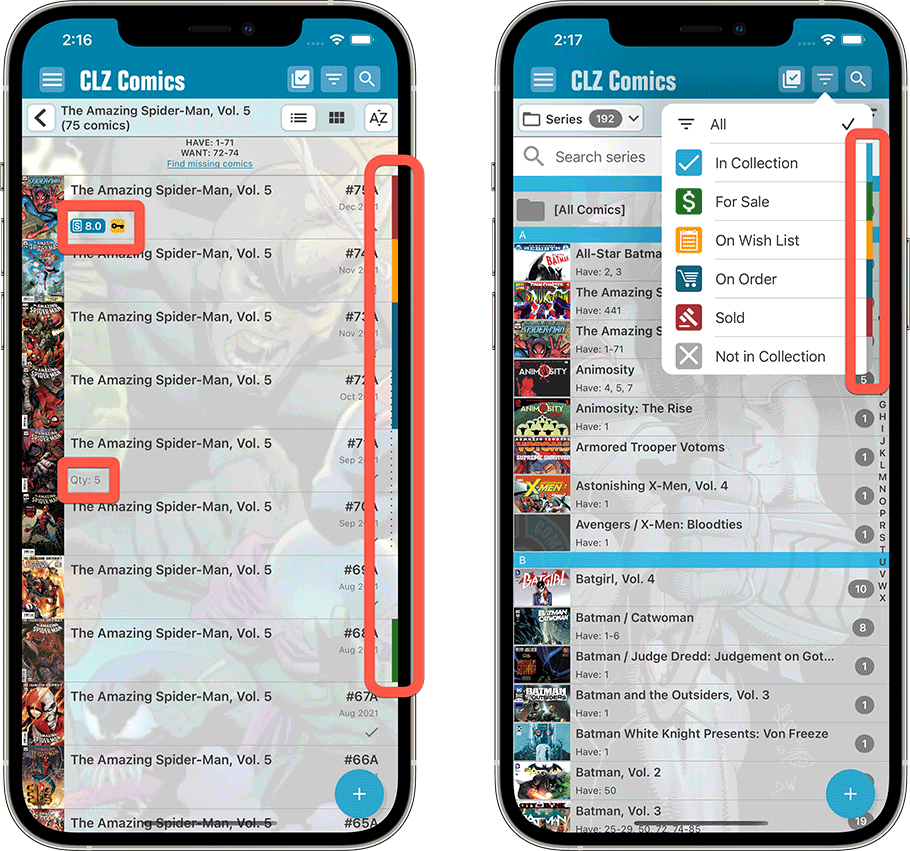 Finally, by popular demand, you can now opt to show Cover Dates in the list (instead of Release Dates). Use the new setting in the Settings screen to toggle between the two. 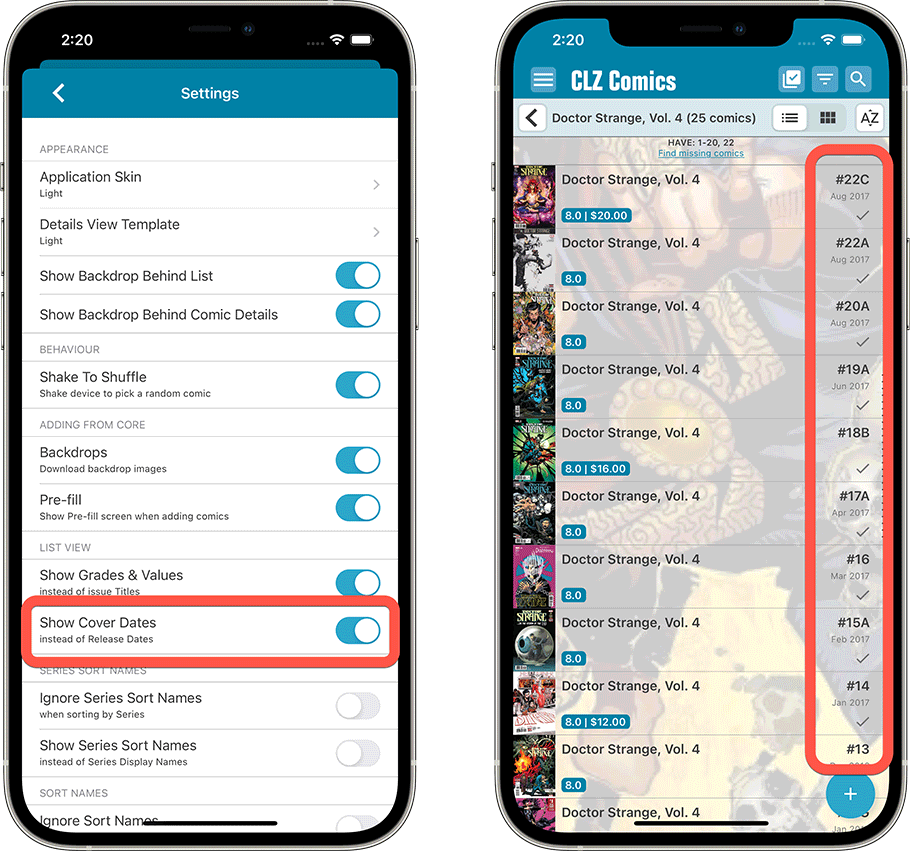 The Add Comics from Core screen is of course THE most important screen of the app. For version 7, we have implemented 3 improvements to this Add screen:

So in today’s update we added a new “Variants” toggle in the settings bar right above that issue list. The Variants toggle lets you Show or Hide variants, in other words, if you set it to hide variants, it will only show the “A” variants, resulting in a much shorter list to scroll through. 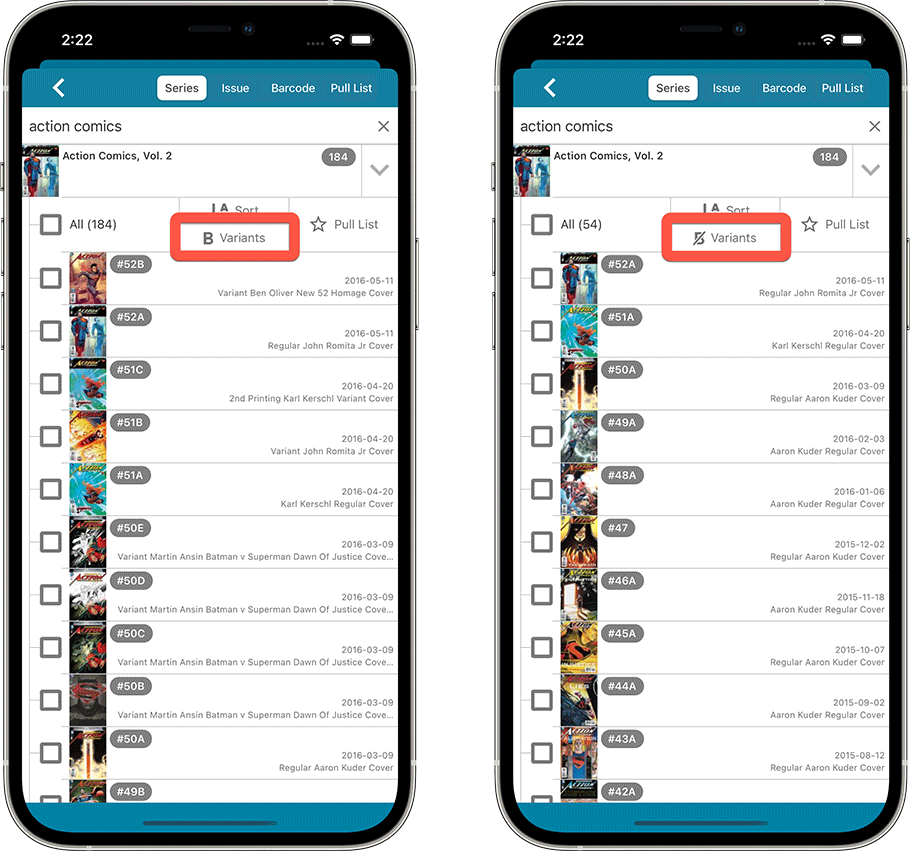 When adding by Series, you sometimes need to pick your variant from a long list of variant covers. And the cover thumbnails in the issue list are too small to decide. Of course, you could preview the comic and keep going back and forth between the issue list and the preview page.
But now, previewing larger version of the covers is much easier and quicker, just tap the thumb to enlarge the image, tap again to go back: 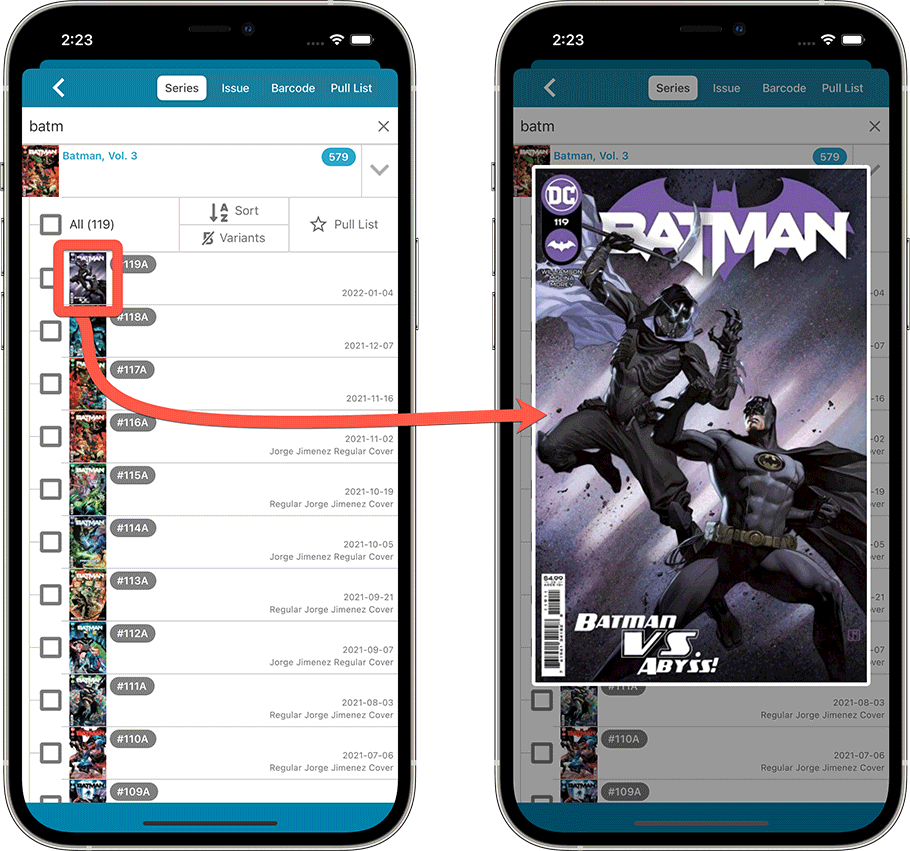 A suggestion, sent to us by one of our users:

Why don’t you make the app do a different beep when a barcode is not recognized? That would be helpful when quickly scanning a stack of comics.

That is a great idea actually, so we implemented it. After the initial “scan beep”, the app now gives a 2nd beep that differs depending on the number of results:

After we introduced the Missing Comics screen, about a year ago, we kept receiving the same two complaints from you all:

Both very good points, so with v7 we are introducing 2 new settings: 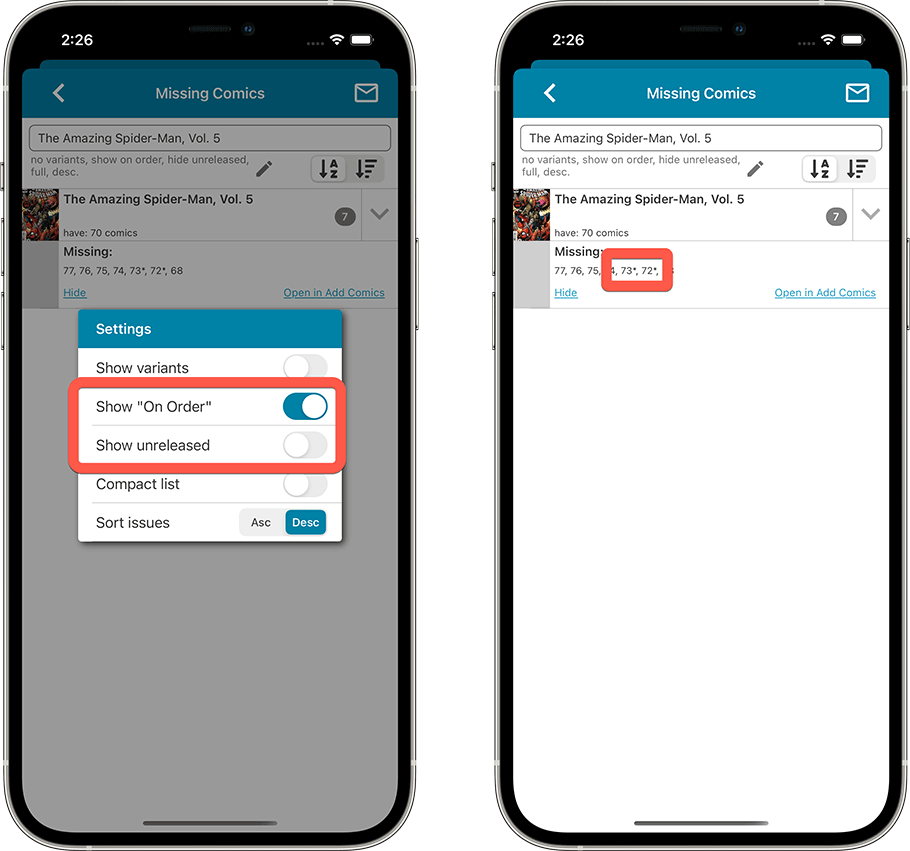 Use barcode scanner to search your own database

Up till now, the built-in camera barcode scanner was only ever used to add comics by barcode. But with v7, we have now also enabled it to: 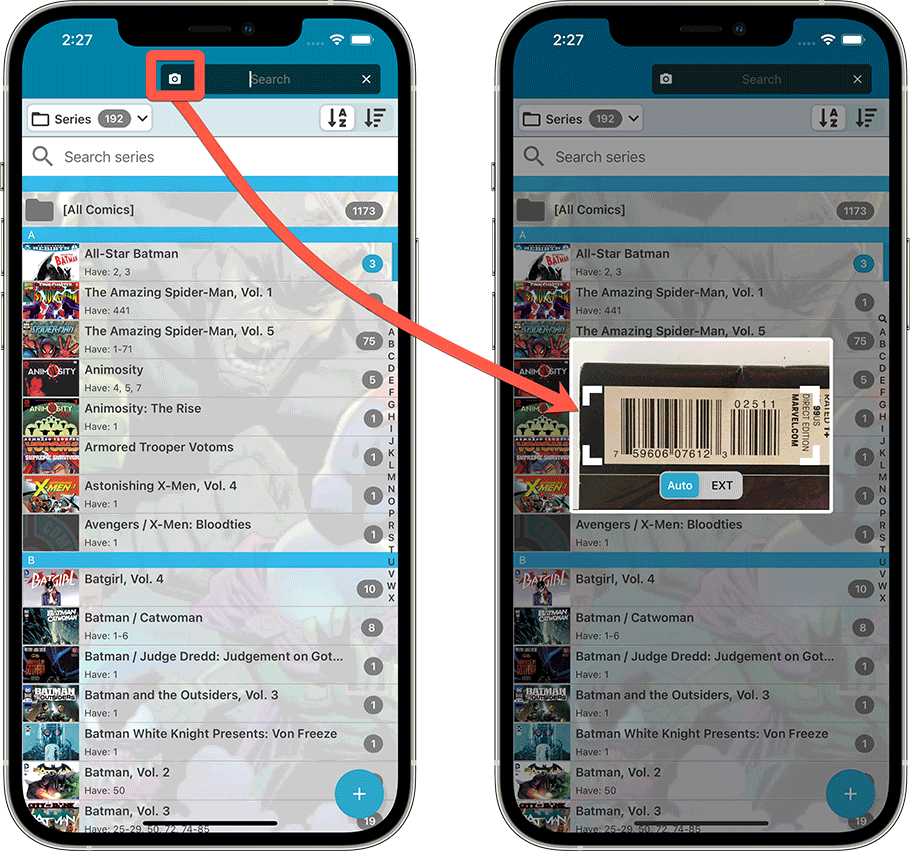 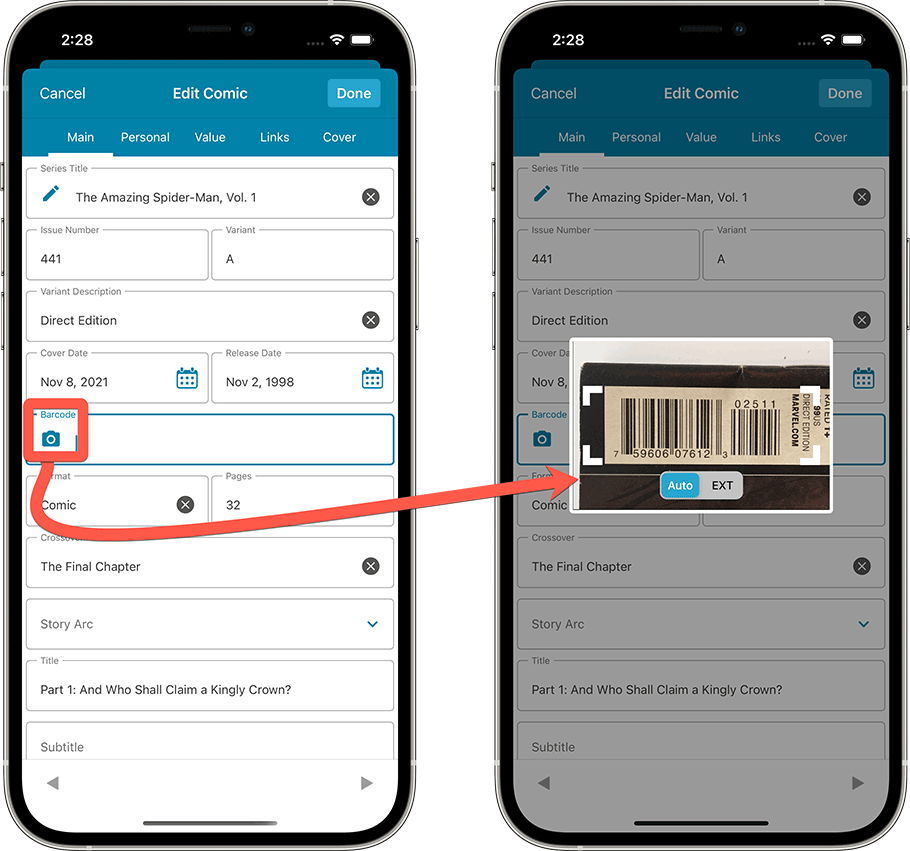