Alwin here, with the latest news on Comic Collector for Mac OS X.

As you know, we were planning to release a full-featured Comic Collector for Mac on May 17. And with “full-featured”, I mean a Mac edition with all features of the current Windows edition. Well… I am afraid we will not be able to reach that goal.

But I have come up with a cunning plan. Here’s the deal …

First, let me explain what the problem is. We started on this project with two goals:

First, we misjudged the functionality of the Windows edition. We had gotten so used to the program, that we forgot about all the small tweaks and improvements that were implemented through the years (Comic Collector for Windows has been around since 2002!). Mark and AJ (who are testing the Mac edition) keep running into stuff still missing in the Mac edition, causing our “TO DO” list to continuously grow, instead of shrink. Not a pretty sight so close to the deadline…

Second, creating the shared framework while working on Comic Collector is complicating (and slowing down) the implementation of every single feature and screen. For instance, take the Add Automatically screen. Quite a complex screen by itself, but preparing the screen to handle not only comics, but also movies, books and CDs is a lot of work. Even a seemingly simple feature like the Edit Lists screen turned out to be huge project in itself, because the new code needs to be ready for every type of list item that exists in all Collector programs, not only those that Comic Collector needs.

I have talked about the problems with the team, and here’s what we came up with:

We still stand behind our decision of creating the shared code framework. Yes, it may be slowing down our progress, but we are confident that the extra time we invest now will be earned back during the development of the major upgrades of Movie, Book and Music Collector for Mac.
However, the idea of making the first release of Comic Collector for Mac completely up-to-date with the Windows edition may have been a little optimistic (to say the least).

Looking at the current internal build of the Mac edition, we realized that, in its current state, it already is a very good and fully usable comic cataloging program. Yes, it may be missing some stuff that is available on Windows, but does that make it unacceptable as a comic book database tool for Mac? No, we don’t think so. So here’s the new plan:

What will be included in v5.0?

Basically, everything you need to add comics to your comic database, to edit their properties and to browse, sort, group and search your comic collection, and more … Here’s the full list: 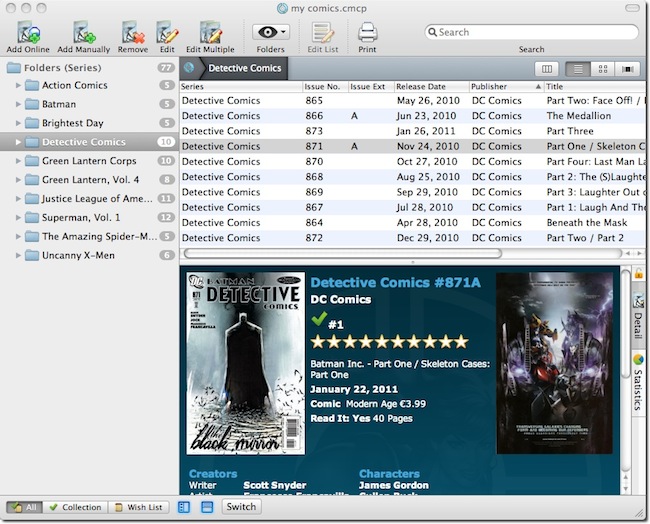 What will be added later?

This is the list of “secondary” features, that will be missing from next week’s 5.0 release, and added in future free updates:

So… that’s the deal. I hope that most of you will agree this is the best way to go, as it means you will not have to wait any longer, and you can get started cataloging your comic books on your Mac next week.

Of course, you may find that a feature that is essential for you is not in next week’s release. If so, then I recommend to postpone your purchase until that specific feature has been released.